In 1968, mortgage rates were 8.5%. The next year, rates went down to 7%. Homeowners could buy a 15-20% larger home for the same payments if they could find someone to assume their mortgage. 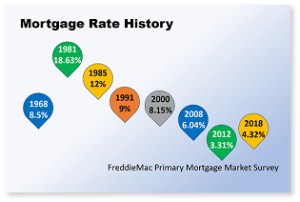 In October 1981, mortgage rates reached 18.63%. A $250,000 mortgage had a monthly principal and interest payment of $3,896.46. As astronomical as that rate sounds, people were still buying homes and were good investments. FHA and VA mortgages were very popular in certain price ranges and they allowed anyone to assume the mortgage regardless of the credit. If you could find a person to take over your note, you were free to qualify for another mortgage.

Four years later, they were still over 12%. The monthly payment was $2,571.53. Believe it or not, people were excited to be paying only 2/3 what they had to pay a few years earlier.

Rates fluctuated for the next few years until now, and most of the experts are expecting them to be above 5% by the end of 2018.  Rates have increased each week for the last six weeks to 4.38% with payments of $1,240.12.

The average mortgage rate for the past 47 years is a little over 8%. The real estate and mortgage markets are cyclical. Rates have been historically low for a long period but will probably continue to rise. Most buyers don’t pay cash and mortgages enable them to purchase now. Based on history, even 8% would be an excellent rate. Until it reaches that point again, everything lower is a bargain.